I listened a lot to the first tapped horn I built for the 15″ Eminence I had laying around. What I must say is that I like the bass of the unit a lot. Is sounds very accurate and precise. The sound is what I would decribe as effortless and easy. The best bass I had in the system. That’s for shure.

After listening some evenings with my friends, one of them wanted to know if it would be possible to build something like that but smaller (better WAF, what the one for the 15″ doesn’t have). I serarched a lot for possible drivers, and to make a long storry short, I ended up with a 6.5″ Tangband. Since they are so cheap and to have some more headroom and flexibility in regards to placement I built two units for this guy (and for my pleasure): Note: Access panel to cover the speaker is not installed on this picture (it will be mounted on the aluminum rails).

For testing I placed them simply in between my mains, right next to them. Especially compare them (65l net) to the 15″ TH (430l net) in the right hand corner: I was very curious on what they are capable of. And after a weekend of listening I have to say that the result is way beyond my expectations. Sure, the big one goes deeper and louder, but they just sound great. Very well controlled and smooth, down to the lowest registers. I found myself several times not believing that only the two small TH’s were running (but the big one and the Klipsch were disconnected). They are able to produce very remarkable volumes, much more than usually required for listening music as well as HT. They are capable to keep up with my mains in every way.

Here are the input parameters: Here is the predicted response: This is the theoretical SPL in quarter space at 20V where Xmax (11.5mm !) will be reached. As I said, I built these two for a friend of mine. Since I fell in love with the Tangbands, I already ordered another 4 of the speakers to built some more TH’s like that.

Finally an incredible bang for the buck (at least in my eyes and for my purposes). Very easy to build (I glued them togeter in my living room) and a lot of fun. For an amp I used the unused rear center amplifier from my HT amp. The xover is a 30€ Reckhorn unit. Total investment for the speakers, the MDF (16mm) and the xover approx. 150 Euro.

Recently Martin (forums name herr_der_ringe) sent me his plans of a refolded version of the same horn. It is a 6-fold version, which is less tall and made from thicker material (19/22mm instead of 16mm): 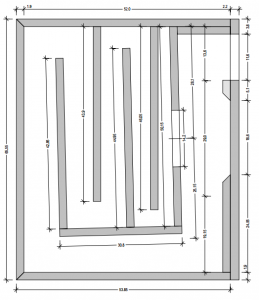